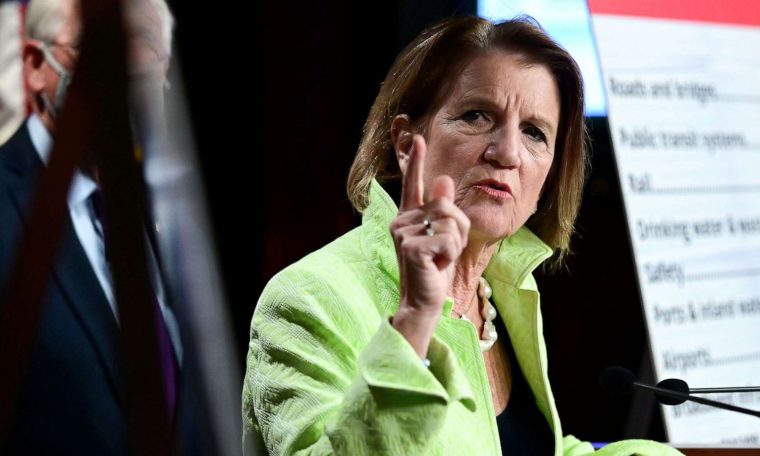 Washington — Republican senators unveiled their counteroffer to President Biden’s infrastructure proposal on Thursday, presenting a $568 billion framework that is significantly smaller than the president’s $2 trillion plan.

According to a 2-page outline released by the lawmakers, the GOP proposal includes $299 billion for roads and bridges, $61 billion for public transit systems and $20 billion for railroads, including Amtrak. It would also provide more than $61 billion to improve ports, waterways and airports, and invest $65 billion to expand the nation’s broadband infrastructure. More than $60 billion would go towards drinking water infrastructure, water storage and highway safety measures.

“This is the largest infrastructure investment that Republicans have come forward with,” Capito said at the Capitol, adding that she has spoken with Democratic lawmakers and the White House. “This is a robust package.”

Capito emphasized that she had spoken to Democrats and the White House in recent days, and called the Republican proposal “serious.” Wicker said that their proposal was “made in good faith,” and argued that infrastructure proposals should be passed by Congress on a bipartisan basis.

“This is a big proposal. A billion dollars is a lot of money. $568 billion is a lot of money,” Wicker said, calling the Republican counteroffer “generous.” He added that the group had shared their proposal with the White House earlier today.

Republicans have concerns about Mr. Biden’s proposal, arguing that it contains too many provisions that are unrelated to traditional forms of infrastructure, such as funding for electric cars and home care for the elderly and disabled. Republicans are also balking at Mr. Biden’s proposed method of paying for the package — a corporate tax rate increase from 21% to 28%, as well as a new global minimum tax for multinational corporations.

The GOP framework argues that funding “should be fiscally responsible and based on needs,” encourage public-private partnerships, and “flow through existing formula programs and proven discretionary programs.” However, it lacks specifics as to how the bill would be paid for, saying only that it would ensure that transportation users, such as electric car owners, are “contributing to the generation of revenue.” It also calls for repurposing unused federal spending, and rejects outright Mr. Biden’s proposal to raise the corporate tax rate, saying that federal pay-fors should not include “any corporate or international tax increases.”

“We want it to be paid for. We’re not interested in raising taxes. We think that people that use our infrastructure are a lot of the solution. There’s a lot of private money out there,” Capito told reporters on Wednesday.

The total for the proposal offered by Republicans is $568 billion over five years, even lower than the $600 and $800 billion suggested by Capito last week, which she said would be the “sweet spot” for any Republican plan. She later told reporters that the $600 to $800 billion number was “just a ballpark figure.”

“In negotiations things are always give-and-take, but this is close to the $600 [billion], and we look forward to hearing a response,” Capito said on Thursday to explain the price tag of the Republican proposal.

But this Republican plan will almost certainly be rejected by most Democrats, as it amounts to just over a quarter of what Mr. Biden is proposing. Senate Budget Committee Chair Bernie Sanders dismissed the counteroffer, telling reporters on Thursday that it “goes nowhere near what has to be done to rebuild our crumbling infrastructure.”

“The funding is totally regressive and anti-working class at a time of massive income and wealth inequality,” Sanders said. When asked if he saw the proposal as a opening for negotiations, Sanders said, “We’ll see.”

But Senator Joe Manchin, one of the most moderate Democrats in the Senate, told reporters Thursday that he did see the Republican proposal as “a negotiating starting point.”

Manchin joined a bipartisan group of House lawmakers on Friday in a press conference with Maryland Governor Larry Hogan to discuss the importance of passing bipartisan infrastructure legislation.

“When I say infrastructure, this is what we’ve come to understand that what we think the greatest need we have now that can be done in a bipartisan way is conventional infrastructure,” Manchin said, referring to “water, sewer, roads, bridges, internet, things that we know that need to be repaired be fixed.”

Manchin said that he was working with the group of 20 bipartisan senators to negotiate some kind of mutually agreeable package.

“I think the White House is receptive to us and for them to understand that we really truly believe that we should do a conventional infrastructure bill that can be done bipartisan. They have an appetite to want to do something, bipartisan, this is doable. The other things that are conceptual we can work on, piece by piece, committee by committee,” Manchin said.

Senate Majority Leader Chuck Schumer said in a speech on the Senate floor Thursday that any infrastructure bill must also include environmental measures, a controversial provision for Republicans.

“I repeat once again that any infrastructure bill we consider here in the Senate must include green infrastructure, create green jobs and make significant progress towards the reduction of greenhouse gases,” Schumer said.

Capito noted on Thursday that the Republican proposal was just a starting point, and that she expected green infrastructure to be addressed in any negotiations with Democrats.

“We fully expect when we get to the negotiating phase, climate will be part of the discussion,” Capito said.

Capito had already told reporters on Tuesday that she was engaged in some bipartisan negotiations on infrastructure measures.

“I’m already engaged with Senator Carper on the water bill and also on the highway bill so you know these engagements are not just — they’ve been ongoing, in some areas,” Capito said, referring to a bipartisan water infrastructure bill with Environment and Public Works Committee Chair Tom Carper. Carper has also previously said that he would like to approve a new highway funding measure by Memorial Day. The committee approved a bill to invest nearly $300 billion in highways in 2019, but it never went further on the Senate floor.

“So hopefully we can use our committee process to work through that and do it the old fashioned way. Give and take,” Capito said. She added that she believed there would be bipartisan support for including broadband expansion in the final bill.

Mr. Biden has been meeting with bipartisan groups of lawmakers in recent days. On Monday, he met with several senators and representatives who had previously served as governors and mayors, to get their opinions on how an infrastructure bill could be implemented at a state and local level.

“I am prepared to compromise,” Mr. Biden said at the meeting. “It’s a big package, but there are a lot of needs.”

Democratic Senator Chris Coons, a close ally of the president, said last week that he would be open to passing a package that cost $800 billion to $1 trillion. He later told reporters that Capito’s proposal to do one bipartisan bill, and then a second infrastructure package containing Democratic priorities, was a “strong approach.”

“Out of the whole, more than $2 trillion worth of things proposed in the jobs and infrastructure plan, that means we would take, let’s say $800 billion of it out, move that is a bipartisan bill, partly paid for with fees. And then several weeks later passed by reconciliation, a Democrat-only bill that would do the rest of that agenda,” Coons said.

Budget reconciliation allows for bills to pass with a simple majority, instead of the 60-vote threshold typically needed to advance legislation, meaning that the second infrastructure package could pass without any Republican votes. Congress used the complicated and arduous reconciliation process to pass Mr. Biden’s $1.9 trillion American Rescue Plan last month.