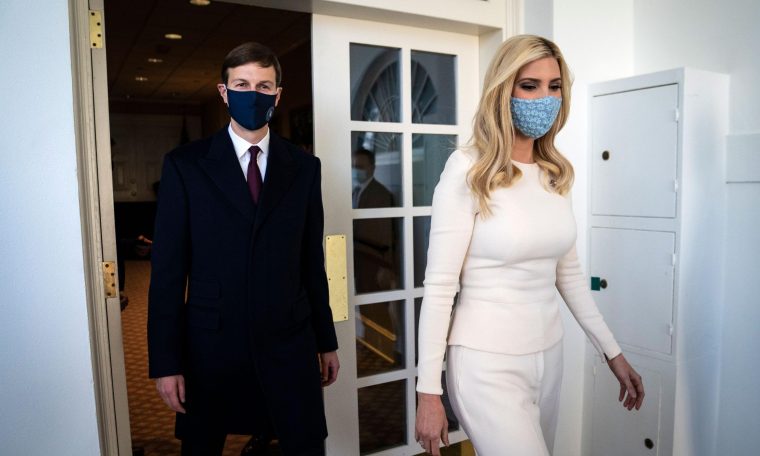 The couple have never been shy about their combined love of power. When they got engaged, Ivanka Trump said in an interview that she knew Kushner was the one when she found his ambition matched hers.

Yet now they find themselves staring down the end of the ignominious Trump presidency: the United States Capitol still showing signs of the deadly mob attack that breached the seat of democracy, thousands of National Guard troops cordoning off the city, President Donald Trump impeached (again) for his role in inciting the mob and the family patriarch robbed of his most powerful outlet after getting permanently banned from Twitter.

To fulfill their goals, Ivanka Trump and Jared Kushner need to pull off the pivot of all pivots.

Instead of a smile-and-wave final White House chapter, the couple are busy trying to keep the President from saying too little or too much, throwing themselves on a grenade they aren’t certain will detonate but not able to take the chance either way.

A White House official sent this statement when asked for comment: “Ivanka came to Washington to give back to a nation that has given her so much and to fight for policies that help hardworking American families. Over four years, she spearheaded policies that created jobs, empowered American workers, fed families in need and supported small businesses throughout the pandemic. She is proud of her service and excited for the future.”

Ivanka Trump was among those who pushed her father to make the Twitter video that ultimately got him banned in the wake of the riot, according to a White House official.

In it he told rioters to “go home,” but in an off-script moment added, “We love you.”

From her office in the West Wing, Ivanka Trump was fielding calls from Capitol Hill politicians who were literally hiding from a vicious and violent mob. Sen. Lindsey Graham, a ubiquitous presence with the President during golf outings and holiday jaunts to Mar-a-Lago, could not get in touch with Trump to beseech him to publicly call for a stop to the insurrection, a source familiar with the conversation told CNN. So Graham called Ivanka Trump, pleading for her to help talk to her dad.

Kushner intervened when other officials tried restoring the President’s social media presence on sites that are often havens for extremists, such as Gab, following the unprecedented ban from several major platforms.

It was again Ivanka Trump key among the aides who pushed the President to issue a subsequent video in the wake of his impeachment, again denouncing any future violence or plots to wreak havoc across the country. There were no words of “love” this time.

The latest move was motivated by fear of potential legal exposure by the President, a source familiar with the taping told CNN.

And according to sources who have worked and socialized with Ivanka Trump and Kushner, their motivation was likely their fear over the state of their beloved moneymaker — the Trump brand.

“They’re trying to keep what little is left for them in terms of sellable currency as Trumps,” said one source, who added the change from “before insurrection” to “after insurrection” has moved the needle on the state of the Trump empire from perilous to dire.

“The proof here about how worried (the family) is is how quiet they are,” said another source, who notes the muzzled Twitter screeds and the dialed-back bravado, most notably of Ivanka Trump’s brothers Donald Trump Jr. and Eric Trump.

Ivanka Trump’s planned “farewell tour” of sorts to shore up the policy wins is now shelved, said someone with knowledge of the discussed public relations blitz. The eldest Trump daughter has not made secret her desire to explore running for office herself, confirm several sources, two of whom wondered aloud to CNN whether those dreams are now impossible to achieve.

“The idea that anyone will forget that her father incited these attacks is about zero,” said one political operative who has worked in Republican politics. “If she wanted future voters to overlook just how devastating the end of this administration is, that’s a big lift.”

The future is Florida?

In December, Trump and Kushner closed on the purchase of a $30 million plot of land on exclusive Indian Creek Island just north of Miami, with plans, friends say, to build a private estate. Murmurs that Trump wants to challenge Florida’s GOP Sen. Marco Rubio for his seat in 2022 are growing — or at least they were before the insurrection.

“Until there’s real evidence that the Trump brand is diminished with the activist base and dominant MAGA wing of the party, and not merely among elected Republicans and establishment types, I think Ivanka would remain the clear front-runner against Marco Rubio,” he said.

Trump could also sit back to see what public sentiment dictates for her future, or she might want to wait the required seven years of Florida residency and then run for governor. One source who knows her noted that Trump has never had a problem believing in her own importance.

“Lack of self-confidence is not something she suffers from,” the source said.

Politics or no, Florida at least provides a more living-friendly environment than New York City, where several former friends have said the couple will not be welcomed back into social circles with open arms.

The Kushner-Trumps also have a cottage at Trump Bedminster Golf Club in New Jersey, which was recently renovated to add more bedrooms. It’s possible they could land there for some amount of time, but politically New Jersey is not Trump country, either.

Florida, where Ivanka Trump campaigned several times in the run-up to the presidential election, could provide a partisan haven, but the ease that she and Kushner were to have to parlay their years in Washington into new personas in the Sunshine State is now gone.

The Trump family itself is not the same as it was in terms of relationships from the years before Washington to the present day.

The most fractured of the bonds is likely the tenuous friendship Trump previously had with her stepmother, Melania Trump. The two women are undoubtedly the most powerful and influential in the President’s life, and prior to the White House years both were aware and respectful of one another’s turf, according to sources familiar with the dynamic. However, Ivanka Trump’s perceived incursions into first lady Melania Trump’s lane have led to tension between the women that’s so bad, one source told CNN, there is little desire by either to be in the same room.

In recent months, Ivanka Trump and Melania Trump have not, in fact, been publicly photographed together, with the exception of the presidential debate in September and the Republican National Convention in August, where Melania sat on one side of the President with their son, Barron, her parents and the Pences, with Ivanka Trump across the stage on the other side.

The elder Trump siblings have simmering issues, too, most stemming from how the President has behaved over the past two weeks.

“There’s been some finger-pointing,” said someone with knowledge of the situation.

But if there were ever a time for the Trump family to get on with its bunker mentality and try for an image upgrade, it would be now — or the hotels, real estate, branded retail and any future Trump-touched business entities could be irretrievably damaged.

“I think this is one time the family has to acknowledge that their actions have had consequences,” the source said.