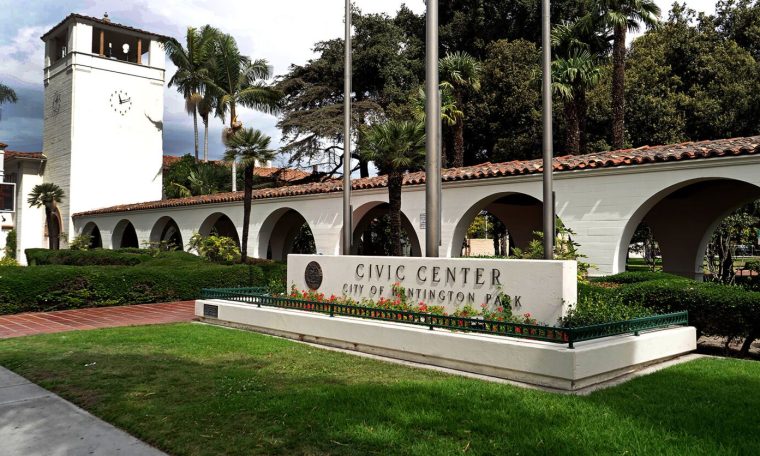 Almost the entire roster of Huntington Park’s finance department was placed on administrative leave and one staffer was arrested as part of an investigation into a records breach that has sparked competing claims of alleged wrongdoing by city employees.

A statement issued by the city Wednesday said officials became aware of a “large-scale security breach of electronic financial records at Huntington Park City Hall” that was “intercepted and contained” by the city’s IT Department and that the Huntington Park Police Department initiated a criminal investigation.

The statement said the Los Angeles County Sheriff’s Department Cyber Crimes Bureau was requested to assist with the investigation and is now the lead agency. The statement said a 48-year-old city employee was arrested and booked on felony charges but did not specify what they were.

City officials said they did not believe records of residents were accessed but were continuing to assess the breach as part of the investigation.

Budget analyst Teresa Garcia was arrested and detained last week on suspicion of unauthorized computer access and identity theft, according to a summary of the charges in a complaint she filed with the city contesting the allegations.

On Monday, five other finance department employees were escorted from City Hall by Huntington Park police, according to their attorney, Oshea Orchid, who also represents Garcia.

The departures led to the closure of the finance department, which handles payroll, budgets, licensing fees and other financial transactions, on Monday and part of Tuesday.

Orchid said that Garcia and the others placed on leave did nothing wrong. She alleged that the finance department staff are being targeted in an attempted coverup of suspicious bank transfers and city contracts that some employees allege are being improperly awarded to companies with political ties.

“We believe that management is concerned about them having access to information about the budget and bank accounts, because the employee arrested was someone with a great deal of access to bank accounts and transfers,” Orchid said.

The city’s employee union this week filed a document with the state Public Employee Relations Board alleging unfair labor practices and a pattern of city officials targeting finance department employees for retaliation.

The extraordinary events unfolded after officials discovered that a finance staffer had allegedly “captured employee identity information” in what Mayor Graciela Ortiz called “a serious breach of confidential data.”

City attorney Arnold Alvarez-Glasman told The Times an investigation of the alleged data breach was begun Thursday, the day Garcia was arrested.

City officials confirmed that six staffers in the nine-member finance department were on leave.

One of those remaining was finance director Nita McCay, according to Orchid.

Few details have emerged about the bizarre episode. Reached by phone, McCay declined to answer questions. Alvarez-Glasman confirmed that a number of employees were placed on administrative leave but would not provide more details, citing the need for confidentiality.

Ortiz said the finance staffers were placed on temporary paid administrative leave to “maximize the integrity of the on-going Sheriff investigation.”

City officials Monday issued a notice to employees about the breach, adding that “financial records, as well as personal and other confidential information of all employees associated with the City financial systems, are secure.”

“The City, along with partner law enforcement agencies, are conducting a criminal investigation to determine the gravity of this incident,” the notice said.

On Thursday, Huntington Park police detained Garcia and seized “all of her belongings from her including her personal phone, apple watch and hard-drive. She was then fully searched and put in a cell” for several hours, according to a legal claim she filed against the city Monday.

The claim said she began downloading financial records to a hard drive in 2019, when she became “concerned that City Officials may be mishandling public funds and that the City’s contracts may be given out to certain companies due to their political ties rather than the City following its procedure.”

She also learned that the FBI “was investigating the City based on allegations of this nature,” the claim said. The claim is a precursor to a lawsuit.

“Concerned about being implicated in corruption in the City, Garcia continued her practice of saving her work and related accounting materials to a backup drive,” the claim said.

A spokeswoman for the FBI said the agency would neither confirm nor deny an investigation as a matter of policy.

Alvarez-Glasman said Garcia’s concerns were “misplaced.” But he said the allegations of corruption prompted the city to refer the investigation to the Sheriff’s Department.

Questions remain about how the city will operate with most of its finance department staff absent.

Alvarez-Glasman said city officials were “taking steps in which to ensure that the financial circumstances and operations are being properly administered,” but didn’t elaborate.

On Monday afternoon, residents took walks around the grassy City Hall courtyard and a few people sat at picnic tables.

Inside, a woman stood behind a desk surrounded by plexiglass.

Fernie Gonzalez, a resident, said he was inside City Hall and noticed that the finance department was locked and not open for business.

On Tuesday afternoon, the city had posted a notice on Facebook that the finance department was “open to make water, business licence and pet license payments.”