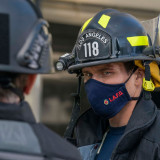 ATHENA INVESTIGATES A MURDER DURING A NEIGHBORHOOD BLOCKPARTY AND THE 118 RACE
TO DIFUSE A BOMB THREAT ON AN ALL-NEW “9-1-1” MONDAY, FEBRUARY 8 ON FOX