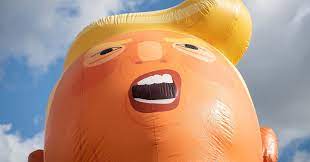 A popular guests at protests against President Donald Trump — “Baby Trump” and “Bunker Baby” balloons— made the scene Saturday ahead of the president’s campaign rally in Tulsa, Oklahoma.

The two 20-foot-high helium-filled balloons of a diapered, petulant Trump floated near The Shrine, a live music venue some 2 miles south of Tulsa’s BOK Center arena, site of the rally.

Kajeer Yar, one of the owners of The Shrine, said it was the first time that the two famous balloons appeared in the same city for a single event. The balloons appeared over labels reading “Baby Trump” and “Bunker Baby.”

The balloons appeared as part of a fundraiser that brought in close to $12,000 to help restore the historic Vernon African Methodist Episcopal Church. The church is the only building left in the historic Black neighborhood targeted in the 1921 Tulsa Race Massacre in which a white mob killed about 300 Black residents, the Tulsa World reported. Organizers hope to raise a total of $1 million to restore the church.

“The president of the United States has governed solely to his base and not to those who aren’t necessarily predisposed to his points of view on issues such as immigration, social justice and, frankly, wealth distribution,” Yar told the Tulsa World. “We think the balloon calls to mind the childish nature of governance through partisanship.”

Check out more of Yar’s thoughts in the video above.

Below, the pastor of the historic Vernon AME Church talks about Tulsa, the massacre and Donald Trump, whom he called “virtually tone deaf when it comes to concerns of the African American community.”